Skip to content
Home » Exploring The Most Aesthetic Mosques in Phuket

Since Thailand is a secular country, there is freedom of religious practice all across the state. The south of Thailand has a large Muslim population including Phuket. Muslim comprises 20% of the total Phuket’s population and hence, you can find plenty of stunning mosques dotted all around the island. We have listed down 9 major mosques around Thailand that are truly mesmerizing.

Address: 83 Phrabaramee Rd, Tambon Patong, Amphoe Kathu, Chang Wat Phuket 83150, Thailand.
You can spot this beautiful green-dome mosque on the Phrabaramee Road as you move towards the Patong beach from Phuket. The mosque has three floors.

On the ground floor, there are separate ablution areas for both men and women. The main prayer zone is on the first floor and an additional prayer area on the second. The mosque has regular worshippers who come for the five daily prayers. 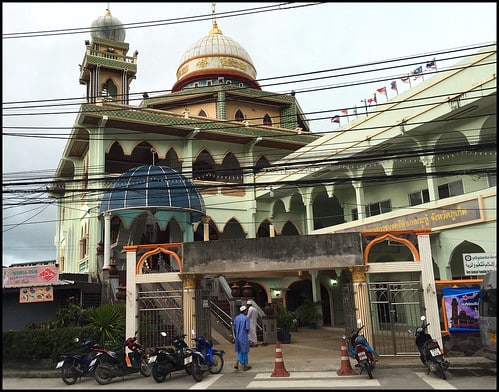 It receives the highest number of devotees on Friday congregational prayers. Although there is no private parking available, you can easily park along the main road. You can find many restaurants offering Halal food in the close vicinity of the mosque.

It is located north of Patong, at the foothills of Kalim village. The mosque has two entrances as it is situated along the joining area of two roads. The aesthetic Gothic architecture lends an appeal to it.

There are three floors out of which the ground floor is exclusively for parking vehicles. The congregational prayers take place on the upper two floors.

Despite a parking place inside the mosque, there is a dearth of space and hence the worshippers have to park their vehicles near the kalim beach.The mosque is at five minutes uphill walk from there.

It is the most prominent mosque in the Kamala Village of Phuket. The mosque is situated right opposite the Kamala Sub District Administration Office on Khok Yang street. The marble mosque has been divided into two different sections for men and women.

For men, there is a single-storey prayer zone whereas women have a rather smaller two-storey space for offering prayer. The building can accommodate a total of 700 people at a time at its full capacity.
On the extreme right of the mosque is a four-level minaret that can be spotted from miles away, making it a popular landmark. 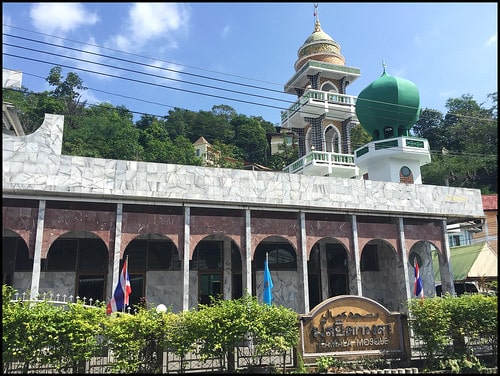 It is one of the two most popular mosques in Patong. The mosque is located in the heart of the city at a distance of 50 meters from Phrabaramee Road. Patong beach is 200 meters away from here.

The mosque has two floors. While the ground floor is for ablution, the prayer area is on the first floor.The entrance of the mosque is just opposite the Sea Sun Sand Resort & Spa Patong. The maximum capacity of this mosque is 500 people.

Address: Baan Bang Kontee, Moo 5, Soi Ruamjai, Viset Road, Rawai, Muang, Phuket 83130 Thailand. It is the only beachfront mosque in Phuket. The mosque has two storeys. It has several transparent glass doors and is always smelling fresh with the breeze from the sea.

The main prayer hall is on the first floor. The ground floor is used for several purposes including library, meeting hall and as for office work. However, during the eid prayers that take place twice a year, this floor is occupied by the worshippers for prayer. 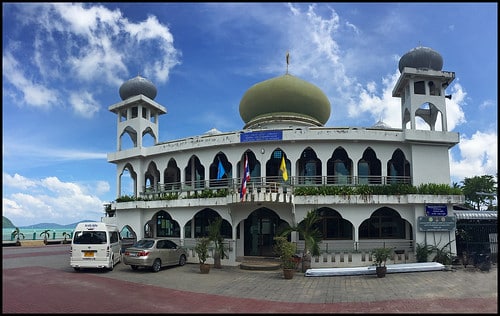 The balcony has long seats for the people to relax and savor the beautiful view. The mosque is enclosed in a wide space that is utilized for several purposes such as parking, playground, general gathering, and festivals.

It is located on the main road that leads to Panwa Cape. The mosque has two floors out of which the prayer hall is on the ground floor, unlike most mosques in Phuket. It has two minarets. The mosque has separate ablution sections for men and women.

The men’s section is just at the entrance of the mosque and the ladies’ section is at the back. The mosque has parking of its own but it is very small. The second floor has an additional prayer hall that is generally utilized during the Friday congregational prayers. 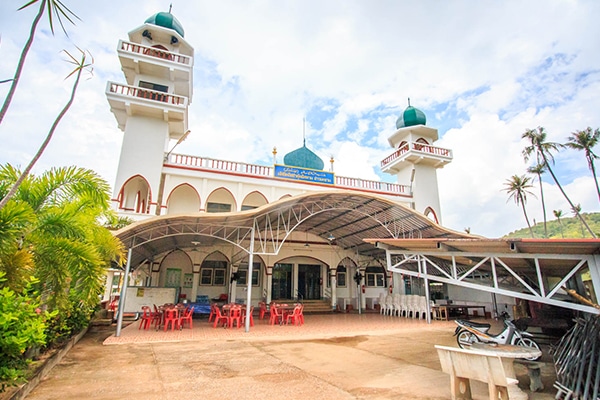 It is by far the biggest mosque on Phuket island. The mosque is easily accessible due to its central location on the main road from Cherng Talay leading to Surin Beach. It has four magnificent minarets beautifully erected on the four corners. It has the capacity to take in up to 1000 people at a time.

There is an Islamic school for children within the mosque. There is ample space for parking the vehicles, both around the mosque’s courtyard and along the inside street of the mosque. 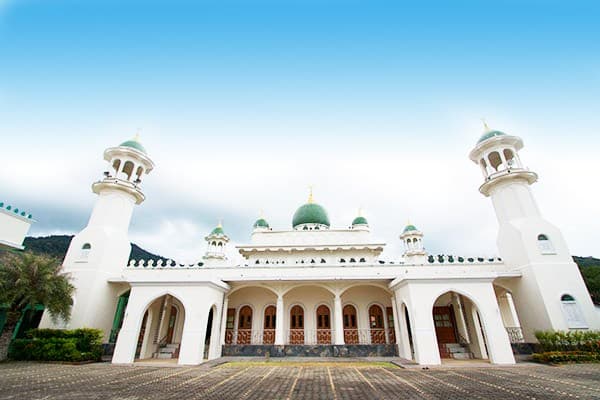 It is a small mosque located on Laem Hin Village’s main road. The mosque has two floors and prayer is offered on both. The daily 5 prayer times are performed every day. The daily worshippers in this mosque are generally locals.

However, for the Friday congregational prayers, some tourists also join. Unfortunately, the mosque does not have any parking facility and the visitors have to park along the nearby road. 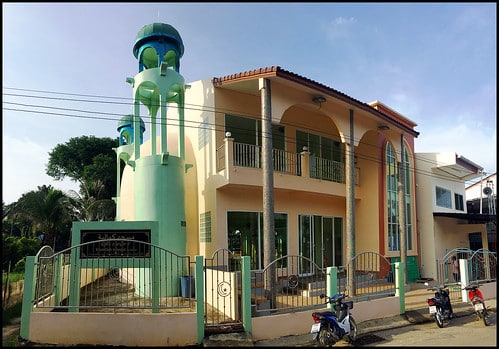 Besides these, the other popular mosques in Phuket are:

1. Where can you hear the call to prayer in Phuket

2. Where are Shia mosques in Phuket?

All the mosques in Phuket welcome muslims from all sects 🙂

3. Which mosque in Phuket has the best parking facility?

4. What are the etiquettes of entering a mosque in Phuket? 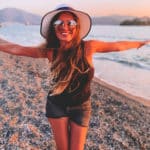